Can You Use Pool Salt In A Water Softener?

Water is a necessity and you can’t survive on dirty water.

So whether it be your pool, shower, cleaning, or drinking water, it should be clean and filtered.

For this water treatment is necessary.

One such treatment is through water softeners that treat your water to remove hard minerals like calcium and magnesium. Softeners use salt to do so!

We’ve got the answers for you ahead! 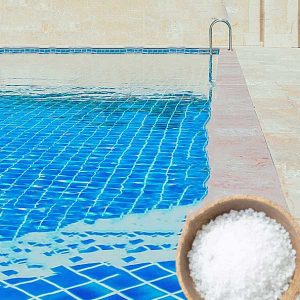 Can Pool Salt Be Used In A Water Softener?

You may think that since pool salt treats pool water, it can also be used as an alternative for water softeners.

That’s not true. Pool salt shouldn’t be used in a water softener. Even if you did, you’ll see no results, and it might damage your unit as well!

To treat pool water, you need the purest quality of salt. That is also true for water softener salt. Although there’s no doubt in the purity levels, pool salt isn’t eligible to be used as softener salt due to its texture.

Pool salt is highly refined and fine. Water softener salt is used as crystals or pellets. The texture of pool salt will massively impact the brine’s effectiveness and will cause more salt bridging as well!

What If Pool Salt Is Used In A Water Softener?

Water softeners require a coarser type of salt. The best water softener pellets or crystals can quickly recharge the resin.

If you were to use fine pool salt instead, the regeneration cycle would be prevented from occurring normally.

Finer salt crystals can lead to salt bridging that inhibits the process of your water softener. You’d have to physically remove these crusts of salt through a broomstick handle!

During the regeneration cycle, this can dilute the brine solution with freshwater since the unit will draw saltwater slower.

Normally, the salt solution is drawn fast so that it recharges the resin more quickly. However, the fine nature of this salt may draw brine very slowly causing very salty soft water.

Pool salt has the same purity as softener salt. The difference is in its texture that changes its properties.

Pool salt is refined and minuscule salt. If used in a water softener, as described above, it would result in salty water instead of soft water.

If used inside a water softener, pool water salt will shrink even further and will be left behind in the tank. This pool salt residue can form clumps in the water softener’s valve!

But if you were to form pool salt into pellets, it could be used in your water softener!

Softener salt comes in the form of pellets or crystals.

When used in a softener, even when they shrink, they don’t shrink enough to be left as a residue in the tank.

Water softeners need a coarser and non-dense salt to operate smoothly. Although, both softener salt and pool salt match on purity levels!

As mentioned, for water softeners texture is the most important part of using the correct softener salt!

So even if you’re using pool salt, make sure you use the correct texture!