Which Type Of Water Should You Drink? Distilled Or Purified Water

The importance of water cannot be stressed enough. Its uses are countless and it’s crucial to both our own personal health and that of our family’s.

When it comes to drinking water, however, its different types can be confusing. 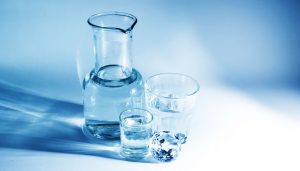 While they are all safe to consume, which type of water trumps the rest? Distilled water? Purified water? At one point in your life, you may have asked this question.

Distilled water VS purified water all boils down to the process the water went through in order to reach its purest form.

Before getting into the exact process for two of the most common types of drinking water, let’s understand what each type means.

What is Distilled Water?

As the name implies, this type of water has gone through the process of distillation. This process has been used for many years now to isolate two different substances.

While there are several ways to do this, the most popular method of distillation is through heat.

The Process Of Distillation

The process of distillation happens when the water reaches its boiling point.

At a constant temperature, the water will evaporate and not the other substance found in it — this is where the separation of two substances happens.

Since you’ve basically sieved out the impurities in the water by heating, the end product becomes much safer to drink.

Pros and Cons of Distilled Water

PROS
+ Removing Solid Impurities: In distillation, you’re able to get rid of solid impurities in the water such as dirt and sands.

+ Removing Minerals: Most minerals have higher melting and boiling points than water, so it’s the water that gets to evaporate first, leaving all these contaminants behind.

+ Effective on Cleaning: Cleaning can be so effective because no contaminants are present. Distilled water is also known for its ability to not leave scratch marks on any surfaces when used for cleaning.

There is no perfect solution when it comes to filtration. Here are some of the key drawbacks from distillation.

– A Complicated Process: The distillation process is a complicated process which involved heating and cooling down the evaporated gas. It requires a lot of energy.

As such, it can potentially water’s healthy minerals such as potassium, magnesium, and sodium. These minerals are needed to strengthen the body’s systems, and removing it from water would be a complete waste of important vitamins and minerals.

Who Will Benefit from Drinking Distilled Water?

People who are not entirely sure if the water found in one area is safe to drink can benefit from the process of distillation.

It’s an unfortunate fact that water from private sources and wells are no longer safe to drink, so it’s best to distill it first before anything.

Distillation is efficient when it comes to cleaning municipal water, but remember that it may not remove every single bad particle in it.

What is Purified Water?

A lot of people believe that purified water is synonymous with filtered water, but let’s clear up the confusion.

As such, the end product, termed “purified water,” is definitely cleaner than any other types of water, be it tap water, spring water, or filtered water.

While purified water isn’t exactly 100% clean, the amount of contaminants has definitely been minimized to a point where it can be consumed by humans.

It’s worth noting that purified water can be sourced directly from the tap, from a groundwater source, or a spring.

Filtered water is water that has gone through layers and layers of filters which filter or perform ion exchange to remove contaminants.

It separates the water from the dirt. Unlike purified water which is often referred to as reverse osmosis water, filtered water are able to retain great minerals.

Pros and Cons of Purified Water

Purified water has gone through several levels of purification processes to make sure that water is clean. Here are some of the benefits.

+ Removes 99% Contaminants: It’s safe to say that purified water gets rid of 99% of harmful compounds or chemicals and kills bacteria that’s been inhabiting in the water.

Similar to distilled water, it comes with several drawbacks.

– Electrolyte Imbalance: Purified water can potentially cause electrolyte imbalance. Your body needs electrolytes in order to function properly, but the purification and filtration process could possibly remove these.

– Remove All Minerals: Purification remove all the contaminants as well as beneficial minerals such as calcium and magnesium.

– Slight Acidic Water: Reverse osmosis will lower down the pH to a slightly acidic state. However, it doesn’t post any health risk according to WQA.

Who will benefit in Drinking Purified Water?

Purified water is best given to people suffering from any sickness.

In fact, in many hospitals, purified water from manufacturers that use reverse osmosis is the choice for drinking and cleaning wounds, as this process effectively removes, viruses, bacteria, heavy metals, and industrial and agricultural toxins.

Access to clean drinking water is essential to health. Depending on where you live, the source of public drinking water may be regulated in order to make it fit to drink.

But still, it’s safer to drink purified water since it reduces the contaminants commonly found in tap water.

As mentioned, a lot of people confuse purified water with filtered water and vice versa.

But the truth is, the filtration standards and treatments used in purified drinking water are much stringent.

Therefore, it should be the most preferred option due to the fact that it can virtually make any kind of water source safe to drink.

There’s a difference between distilled water VS purified water for sure.

But keep in mind that no matter what type of water you choose, drinking lots of it is the way for a healthier and better life.

That said, make sure not one drop is wasted.  While it’s recommended to drink as much as you can, see to it that every drop counts.

And one more thing — make sure your containers are stored in a clean area far away from possible contact with contaminants.

Water is needed in order to cleanse the body, quench thirst, and create a better environment, so it’s important to make sure that it’s clean before using or drinking it.

What are you waiting for? Head over to see what are the best purifier system that we recommend.