Does A Water Softener Add Salt To Your Water?

The use of softener salt is necessary for an ion-exchange water softener.

Although a water softener takes care of the hard water problem efficiently and quickly, most users still have underlying questions.

One of the most common questions is the use of water softener salt and its effects on soft water afterward.

If you’re adding a large amount of salt at every refill, you might wonder how much might end up in the water you’re using!

Keep on reading to know the answer to your water softener questions! 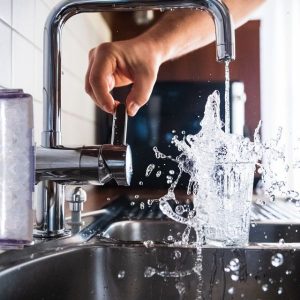 Does A Water Softener Add Sodium To Water?

The answer here lies in explaining the state of salt or sodium chloride.

The water softener uses a regeneration cycle to remove hard water ions by rinsing them with brine solution. During regeneration, the calcium and magnesium ions are replaced with sodium ions, and the excess brine solution is drained out.

In truth, water softeners don’t add salt to your water. Instead, they break down salt to use its sodium.

In the end, you’re left with only a tiny concentration of sodium in your water supply. This amount is safe for consumption and is found in most other things such as bread, cheese, etc.

Can You Taste The Salt?

Most users think that since they’re using a large amount of salt, their water supply will taste salty.

However, we fully dismantle this myth. Softened water does not necessarily taste salty. There would be more sodium in other edibles you consume daily than in softened water.

This is because the salt is used for the regeneration process in the brine tank. Salt is used to regenerate the resin bed so that your water softener works effectively.

Any excess salt or brine solution is drained or flushed out. This ensures that you’d be unable to taste excess salt in soft water.

On average, consumers have a larger intake than what is recommended. Most of this consumption comes from processed and frozen foods.

The recommended daily consumption of sodium is less than 2300mg a day.

The exact amount of sodium left in soft water depends on how hard your water supply is. The harder your water supply, the more salt you’ll have to use. Only then will the ion-exchange process work effectively.

The best salt for your water softener will additionally ensure that you have no salty aftertaste.

Ion-exchange water softeners work through an exchange process. This exchange occurs in the resin tank.

For this exchange, the resin bed needs to be charged repeatedly. This is where the softener salt comes into play.

The brine solution has a positive charge. When it is washed through the resin tank, the same exchange occurs.

However, this time hard water minerals attached to the resin bed are released so they can be drained out of the system. The resin is now recharged and ready to carry out the same process again.

In the next cycle, a bit of sodium is released from the resin is added to your soft water supply.

In conclusion, water softeners add practically nothing to your soft water. But if you’re still unsure, you can opt for a different sort of water softener as well!