How to Remove Calcium & Magnesium From Water

Hard water can be a general problem with the whole house water supply. When the water in your taps has lots of calcium and magnesium ions, it affects your health and lifestyle. Your soap would not lather; the water heater will start creating problems.

Moreover, the plumbing system forms soap scum due to mineral deposits, thus requiring maintenance now and then. The presence of magnesium and calcium in water can have potential health effects on those who drink it straight from the tap.

You need to look for a hard water treatment solution for your water supply in such a situation. This guide aims to teach how to remove calcium from the water. Not only that, but you will also learn how to remove magnesium from water. 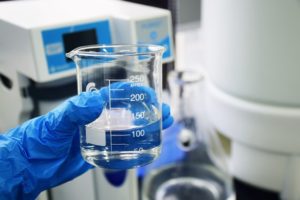 How to Remove Calcium From Water: 5 Effective Ways

There are several different methods on how to remove calcium from the water. But all of them do not have the same efficacy. Following are the strategies that are pretty effective in eliminating hard water impurities from your water supply:

Municipalities employ sedimentation as one of their water treatment options. It is a physical method of water purification. Suspended solids are removed from water using gravity. The particle size and weight determine the potency.

Heavy particles settle, forming deposits while suspended solids with a gravity comparable to water remain afloat. This process is commonly carried out in tanks of different sizes in wastewater treatment. Sedimentation is usually followed by a trickling filter process which removes the precipitates.

Hard water that is primarily calcium carbonate and calcium hydroxide is called temporary hard water. The minerals dissolved in water are precipitated when heated to a higher temperature in water heaters or a smart washing machine.

Because boiling ultimately removes all of the calcium in the water, including calcium hydroxide, the outcome is quality water softening. Boiling is a simple and inexpensive approach to soften for drinking. However, it only deals with temporal hardness, so it is still slightly hard. The latter contains dissolved calcium sulfate, which will not be removed by boiling.

If the water you are using is not for drinking purposes, then you can use washing soda to deal with its hardness. You can add it to your washing machine along with your laundry. Washing soda has sodium carbonate (a carbonic acid salt) that helps decrease hardness in water. In basic terminology, it removes dissolved excess minerals from hard water. As a result, we get softer water which emerges from the elimination of specific mineral ions.

Calcium is naturally alkaline, meaning it has a pH of more than 7. Whereas, White distilled vinegar has a pH of roughly 2.5, making it highly acidic. Hence it helps to neutralize the calcium content in hard water through chemical treatment. Even though it balances it by chemical treatment, you don’t want to use it in your drinking water.

Distillation is the most widely used water softening technique. In this process, impurities in water that have different boiling points (the temperature at which an impurity boil, such as magnesium and calcium) are separated by heating the hard water. So, the water heats up to form steam and gets collected while the inorganic compounds do not evaporate since they have different boiling points, as explained earlier, and hence this way purified water is collected. However, distilled water is safe to drink but does not contain any nutrients, so not many health benefits.

What are Magnesium and Calcium?

Magnesium and calcium are inorganic ions that are present in our water supply as well as food. These ions are highly beneficial to our body, and their absence can lead to various health problems. But as we know, excess of everything is terrible. The same is the case with these ions. When they are present in our whole house water supply, they result in a lot of trouble.

Your skin would get dry and scaly. The colors of the clothes fade. The plumbing system gets clogged up. The water heater gets affected a lot. Hard water build-up starts to accumulate in the hot water heater system. The increase in temperature results in the precipitation of these ions and fastens up the process. If you suspect you have these ions in your water, we would suggest you reduce the temperature of the water heater to protect it.

What Are The Sources of Magnesium and Calcium

Magnesium is present in large quantities in seawater; therefore, it is referred to as ‘hard water. Elements such as limestone, dolomite, and gypsum are rich in these minerals and release them frequently in the water flow as it passes through the rocks in the river.

Calcium, on the other hand, also exists in the earth’s crust in abundance. It can leach into the groundwater along with rain.

Symptoms and Dangers of Magnesium and Calcium

Skin problems: Hard water results inskin irritation and rough areas on the scalp. They change the ph. of your skin and leave it vulnerable to harmful bacteria and other infections. You can use a bathroom water softener to solve the hardness problem of your tap water.

Hair fall and dryness: Baldness is yet another side effect of hard water. Hair damage, dryness, and weakening are due to the presence of magnesium, silica, and calcium in the water. Not only that but using such water on a daily basis might disrupt your hair follicles, resulting in dandruff and dry hair.

Renal Ailments: Kidney dysfunction has also been linked to excessive usage of hard water. And if not treated, this dysfunction can lead to many more problems in the future. In some of the studies, hard water is also linked to the development of kidney stones.

Water filters are pretty effective in removing the excessive amount of magnesium and calcium ions from the water. Filters having water softeners and reverse osmosis effectively reduce the hardness of water and make it safe for human consumption.

All these filters work on a similar principle. First, they will convert soluble ions into insoluble precipitate, and then they will filter it out. 2nd step is similar for all filters, while the first step changes accordingly.

If you are having severe hard water issues in your area, then a water softener is the best solution to soften water in your whole house’s water filtration.

On the other hand, a salt-free water conditioner does not require maintenance. It uses natural softener media to break the calcium and magnesium bonds into smaller molecules, thus helping you get rid of scale buildup and remove minerals.

Here are some of the best water softener reviews to help you figure out which one do you want for your house.

A shower water filter is meant for showers only. It softens hard water for your shower by filtering magnesium, calcium, and a few other contaminants too. Moreover, it is designed to add beneficial minerals such as vitamin C to the water that nourishes your skin and hair.

Ion exchange is the most common salt-based water softener that works on the ion-exchange process to remove hardness ions. The system efficiently uses positively charged sodium ions in the form of salt to attract other minerals and hard water minerals such as magnesium and calcium and eventually drain them out to get soft water.

You are required to pour water softener salt in resin tanks over a resin bed, and there it will attract the hard water minerals. However, regular maintenance is needed as the salt refills are to be done at least once a week.

Salt-free systems do not have a brine tank and do not even need salt. That means no upkeep and regeneration required!

It is a sodium-free water softener that uses TAC technology for neutralizing hard minerals and ultimately results in soft water. Hence, it is the best water conditioner for hard water softening.

It is also known for its easy installation. Wrapping your pipes around the water supply pipes is the only thing you are required to do. The rest of the work is of the magnetic field.

Reverse osmosis also works well for moderately hard water. In reverse osmosis, hard water flows through the semi-permeable membrane. It removes calcium and other minerals responsible for water hardness. These reverse osmosis systems also have a carbon filter and other pre and post-filters for 99% accuracy.

FAQs on How to Remove Calcium & Magnesium From Water

How do I know if my house water supply is contaminated with magnesium and calcium?

If ions like magnesium and calcium contaminate the tap water at your house, you will notice hard water stains overtime on different things that come in contact with water.
The soap will not produce a good lather, kitchen sink pipes will get clogged, and appliances will wear out quickly. You can contact your local drinking water supply authority and ensure your drinking water is free of contaminants.

A PUR filter can remove a considerable number of chemicals, pesticides, and contaminants like mercury, chlorine, and benzene.
However, its filter cartridges do not soften water and remove magnesium and calcium.

Does Zero Water remove calcium and magnesium from drinking water?

Yes. Zero Water does filter total dissolved substances. It can remove calcium and magnesium, and other contaminants quite effectively from water to make sure your drinking water is soft.

This article has summarized every viable method to convert hard water into soft water. We hope the information in this article proves to be helpful for you. Do comment if you know any other solution for how to remove calcium from water or how to remove magnesium from water. Removal of both of these ions can be tricky, but it’s nothing that a water softener can’t handle.