How to Remove E. Coli from Water

Are you sure the water you are drinking is pure and bacteria-free? According to the CDC, many germs, including harmful bacteria like E. Coli, are present in your drinking water. Drinking such water can cause severe damage to human health if not treated. To ensure your health, you should know how to remove E. Coli from water.

Let’s enlighten you about a few methods to have bacteria-free water. 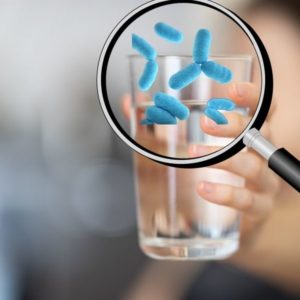 Both surface water and groundwater add E. Coli 0157:H7 to your water system. This is the most dangerous strain of E. Coli. You can follow these methods to remove this bacteria from your water supply.

If you need to clean large water supplies, you should go with a gaseous form. To clean the contaminated water system of a house or municipality, sodium hypochlorite is used. While swimming pools are disinfected using calcium hypochlorite.

The addition of chlorine to the water source causes the formation of two types of compounds. The first to form is electrically neutral hypochlorous acid. In contrast, the second compound is the hypochlorite ion. It is a negative charge-bearing compound.

Hypochlorous acid has strong oxidizing power. Thus, it kills bacteria like E. Coli as the chemicals in their cell walls are oxidized.

That’s why chlorine is highly effective and cost-effective in treating such contamination.

Ultra-violet light is highly effective in removing bacterial contamination of water sources like E. Coli 0157:H7. It is preferable to treat contaminated water because it does not produce any harmful by-products in water systems.

The unsafe drinking water is passed through a chamber. In that disinfection chamber, Ultraviolet rays are passed through the water. These rays have high energy, which kills any bacteria, including E. Coli 0157:H7. But you need to filter the water before passing through the chamber.

UV radiation has an additional benefit. They act on oxygen to produce ozone. Ozone is highly effective in water treatment. It removes smell and colors from water as well.

It is the easiest yet effective method to remove E. Coli. You simply have to bring the water sample to a rolling boil. It needs just a minute of boiling to kill E. Coli. If you are at an altitude of 6500 feet or above, you need to boil it for at least 3 minutes. After boiling, put the water in the refrigerator to cool it slightly.

E. Coli is one of the most commonly found bacteria. It is a coliform bacteria. These bacteria have the shape of a rod. E. Coli helps digest the food, but some strains of E Coli cause infection. For example, the 0157:H7 strain primarily causes diseases.

These bacteria are notorious for causing severe illness. These diseases vary with different strains of bacteria.  E. Coli or Escherichia Coli is present in the intestine of humans and other animals as well. It contaminates water and causes diseases like diarrhea.

E. Coli is present in animal waste and human feces. As it is present in the intestines and gut of healthy cattle, some of it is released in the bowels as well. So when these feces or other material infected with E. Coli gets mixed with well water, it contaminates the private well. E. Coli releases powerful toxins. These toxins pollute the well water and groundwater after seeping.

There are many ways through which E. Coli enters surface water sources. When sewage seeps into the ground, it contaminates the groundwater. The agricultural runoff also has E. Coli that infects the public water system.

The Symptoms and Dangers of E Coli Contamination

E Coli infection is the result of drinking water contaminated with Escherichia coli. Various strains cause different kinds of infection, but the severe infection is caused by the E Coli 0157:H7 strain.  This strain produces a potent toxin named Shiga which is dangerous for intestines. Shiga toxin damages our GI lining and leads to diarrhea.

You are at the risk of having an E Coli infection if you are drinking untreated water. The infection does not show its symptoms suddenly. But it develops and starts showing the symptoms in five to ten days. Sometimes the symptoms start showing in the early stages after just a day of infection.

The symptoms of this infection include diarrhea, stomach cramps, vomiting,  nausea, loss of appetite, low fever, occasionally high, and fatigue. If the condition is too severe, diarrhea can be bloody.

If E. Coli enters the blood, it causes a severe sickness due to rupturing red blood cells. The blood pressure starts to drop. The rupturing of red blood cells causes a decrease in hemoglobin as well. This situation is named bacteremia.

It causes hemolytic uremic syndrome as it destroys platelets. As a result, it causes kidney failure, which is treated with blood transfusions, kidney dialysis, or transplant. If E. Coli enters the nervous system of healthy humans, it leads to meningitis and even death.

E. Coli is very small in size. Therefore, it takes specialized filter systems to remove them. The reverse osmosis system is very effective in the treatment of water as it removes E. Coli effectively. They use specialized filtration membranes that do not allow E. Coli to pass through.

In addition to RO filters, UV radiation filters are also effective. But they also need a prefiltration system that is usually a reverse osmosis filter. UV radiation kills the remaining bacteria that escape RO membranes.

Other water filters, including microfilters and nano-filters, are also effective in removing E. Coli from water samples.

We have compiled a list of the most effective and efficient water filters that produce safe drinking water.

Backpacking water filters are pretty handy in removing bacteria from the drinking water. They have reverse osmosis membranes and filters in them. This feature makes it efficient for water treatment.

Backpacking filters are preferable because of their size and portability. Their filter capacity is more than 100,000 gallons. They filter out contaminants like viruses, heavy metals, protozoa, and E. Coli. These filters are thus very efficient and capable of removing other small-sized bacteria like Campylobacter, Shigella, Salmonella, Vibrio cholera, and Entamoeba Histolytica.

That’s why water treated with these filters poses minimal risk to human health.

Filtered water bottles have filters installed in the drinking water bottle. Now, this works in two ways. Either they filter water when you pour it into them. Or you have to fill the bottle, and they filter it when you are drinking from the bottle. Either way, these are quick and efficient filtration methods.

These bottles have a filter that can remove maximum contaminants. They can remove bacteria like E. Coli as well. Sometimes, they come with an activated carbon filter to remove chlorine. It is helpful if you are drinking water treated with chlorine to kill the bacteria.

Whole house water filters can filter the water supply of the whole house. They also have a reverse osmosis system to clean the water and remove contaminants. The efficient membrane removes even protozoa and bacteria. So, they are the right choice for removing E. Coli.

For removing E. Coli specifically, you should get a filter that has a UV lamp installed in it. The high-energy rays of ultraviolet light kill E. Coli by damaging its DNA. Their filter capacity is quite high and can last up to ten years. They are high capacity, long-lasting, and bulky filters.

Certain filters are equipped with a disinfectant matrix to kill bacteria especially. Escherichia coli is vulnerable to chemical methods because they disrupt its structure. Thus, filters that remove the contaminants from the water and kill the E. Coli bacteria instead of just filtering them are among the best ones.

They have cartridges and membranes specially designed for specific contaminants. And sometimes, they can both kill and filter out the bacteria. Thus, they obliterate the risk of infection.

FAQs on How to Remove E. Coli from Water

No, filters like Zero Water and Brita can not remove tiny microorganisms from water. You can not eliminate E. Coli 0157:H7 with the help of these filters. These mass filters are more effective for removing other contaminants like sodium, nitrates, etc.

Distillation is very helpful in removing E. Coli from well water and tap water. Distillation systems are also based on the principle of condensation and boiling. Boiling the water already kills the bacteria. That is why distillation can also remove E Coli.

A water softener is neither effective in killing nor removing bacteria. It removes metals and minerals, making the water soft, but it does not eliminate bacteria. So, it is a poor treatment for water with E Coli.

Bacteria and viruses in the water supply can be harmful to our health. That is why it is essential to remove them. Removing viruses is not that easy, but the removal of bacteria is very much possible. This article aimed to educate you about how to remove E. Coli from water. We hope you enjoyed it. Let us know your thoughts in the comments section below.