How to Remove Sulfur Smell From Water

Has the local hydrologist recently revealed the presence of sulfur in your water supply? Worry not. We have compiled an article that will guide you about how to remove sulfur from water. All of the methods mentioned in this guide are efficient and cost-effective. Read on to learn more. 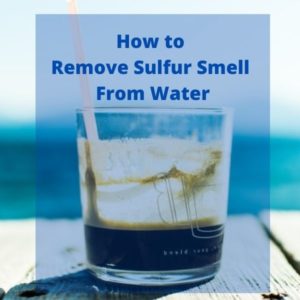 Currently used methods to eliminate sulfur from the domestic water supply include water treatments and filtration processes. Here are the available options to treat sulfur water and effectively remove medium to high concentrations.

Use of Oxidising Medium

You can use various oxidizing media to remove this contaminant from water. These include chlorine bleach, manganese Greensand filter, hydrogen peroxide, potassium permanganate, etc.

Chlorine Bleach: ​Chlorination of stored water systems using 5% – 10% chlorine can efficiently lower the sulfur levels till they become undetectable. This method, however, requires a carbon filter to be used in conjunction to remove residual chlorine.

Potassium permanganate: This acts as an oxidizing agent to remove hydrogen sulfide from the water supply. It reacts with the odorous gas and lowers hydrogen sulfide levels quickly. Many people use it with iron removal filters for an additional layer of oxidization.

Hydrogen Peroxide: 7 % hydrogen peroxide is used as an oxidizing agent to remove hydrogen sulfide gas from the water. As compared to other treatment options, Hydrogen Peroxide agents have a longer shelf life and can be used without filters. It also reduces slime formation, water staining, and corrosion of the pipes.

Hydrogen sulfide gas is the reason for the rotten egg smell commonly encountered in hot and cold water. The installation of an aeration system at the entry points of the water system can effectively blow out the gas before it enters the supply.

Char is produced by heating coal, coconut shells, and other high-carbon sources. It acts as an excellent filtration medium by physically entrapping particles and removing unwanted sulfur odor from domestic water supplies. It is an indispensable component of chlorination systems as well. Installing these can remove solid sulfur-containing particles such as soil and gravel. Additionally, a carbon water filter can reduce rotten egg odor and the stench of chlorine.

Catalytic carbon is a more effective form of activated carbon. It first adsorbs the hydrogen sulfide and then oxidizes it. This property makes catalytic carbon more useful when it comes to bulk removal.

UV-radiation effectively eradicates sulfate-reducing bacteria from the water. It adds a layer of anti-microbial protection to your storage tank and existing filtration systems.

Sulfur is the 10th most abundant non-metallic element that occurs naturally in the environment. It is pale, odorless and is an important component of plants and soil. It is found mostly in hot water systems such as hot springs and geysers. Its presence in our home water supplies is because of the incorporation of hydrogen sulfide in water tables and well waters

In its elemental form, it is insoluble in water. It undergoes microbial decomposition in low oxygen environments. The resultant hydrogen sulfide gas readily dissolves in water. The gas gives off a distinctive smell like rotten eggs and adversely affects the water quality.

Chemical reactions in soil: Weathering of sulfur-containing rocks and degradation of soil can lead to the evolution of hydrogen sulfide gas. This is especially true in areas where sulfuric acid and sulfur-based fertilizers are used.

Action of Sulfur bacteria: Specific types of microbes found within the soil and in the roots of some plants form hydrogen-sulfide as a metabolic by-product. The gas thus produced can seep into the groundwater supplies.

Magnesium rod in hot water tanks: Many people complain of rotten egg odor only when they use hot water. The reason is the release of hydrogen sulfide gas from the reaction between sulfur-contaminated water and the anode rod.

The Symptoms & Dangers of Sulfur

In most areas, water test proves that the sulfur concentrations aren’t too high to cause a potential health risk. Except for making water unpalatable because of the distinctive sulfur smell, there is nothing to worry about. However, where the concentration of the element goes beyond the safe limit, the following symptoms and dangers are reported:

Nausea, vomiting, and diarrhea: Drinking sulfur-contaminated water for extended periods can lead to an electrolyte imbalance. Dehydration is the foremost reported symptom in patients with sulfur toxicity. This is accompanied by an unsettling feeling of queasiness and vomiting. Children and elderly members of the family are more prone to high contamination levels.

Vertigo and increased frequency of headaches: The neurological effect of consuming sulfur-containing water is the increase in the incidence of migraines. Blurred vision and vertigo with loss of balance are some of the manifestations of dangerous concentrations of sulfur in the body.

Clogging and corrosion of pipes: The plumbing system at home can suffer greatly if the sulfur concentrations aren’t controlled. Sulfur causes slime formation that can clog the pipes. Hydrogen sulfide is corrosive to iron, copper, and steel. Damage to the pipes is inevitable without installing proper sulfur removal methods. The anode rods in water heaters are susceptible to rust.

Not all water filters can help eliminate hydrogen sulfide and sulfur, but most of them can reduce sulfur odors. The most effective type of sulfur filters is oxidizing filters and backwashing carbon filters.

Oxidizing filters are a few of the many types that can be used in the case of low to moderate concentrations of sulfur. They can oxidize hydrogen sulfide gas and even eliminate high levels of other contaminants in surface water. They provide optimum corrosion protection for the plumbing systems.

A catalytic carbon filter is another type of filter that can be used to eliminate hydrogen sulfide. Carbon filtration systems can be used in combination with continuous chlorination and hydrogen peroxide injections for better results.

Water filters are the most effective means of removing sulfur, hydrogen sulfide, and the smell of rotten eggs from drinking water. They are affordable, easily available, and can be repaired easily. Most people use these methods for drinking water.

Choosing the right sulfur water filter to remove the coliform bacteria and water smells is essential.  Below are some of the feasible options:

This system is installed right at the initiation of the piping system. It has a multistage operation, including removal of sediments, carbon filtration, and UV filtration. Whole-house filters are installed outdoors. They can limit the influx of sulfur particles and sulfur bacteria before they make their way into the plumbing system. The air charger carbon filter can ensure chlorine-free water even when continuous chlorination is being undertaken.

This filter is portable, inexpensive, and useful for reducing rotten egg water smells. You can even place them in the fridge and freezers for a cold sip as needed. They can easily allow the dissipation of hydrogen sulfide gas and sulfur odor. If it’s only the tap and drinking water that is affected by sulfur contaminants, then a water pitcher and dispenser filter are adequate. They can also reduce the smells associated with chlorination.

For homeowners, the countertop water filter is a good solution. It can filter any water that smells like rotten eggs till it is palatable again. It can be installed on the kitchen counter and near the faucet to eliminate hydrogen sulfide from the water. However, its use is limited to drinking water. A countertop water filter can also be used in lieu of a backwashing carbon filter for chlorinated water. It can remove the stench and taste of chlorine effectively.

This is one of the most commonly used household water filters. It can be installed easily, and Reverse             Osmosis (RO) models are also available. They have the capability to remove up to 99 % of all the contaminants, including insoluble sulfur and sulfur bacteria. Naturally occurring sulfates are effectively entrapped by this filter. By sieving everything beforehand, they offer optimum corrosion protection to the plumbing systems. Hydrogen sulfide is eliminated, reducing the spoiled egg smell considerably. Given that the filters are cleaned and replaced periodically, they can last a long time.

FAQs on How to Remove Sulfur Smell From Water

How do I know if my house is contaminated with sulfur?

Water test kits are available that can detect sulfur levels as low as 0.5 mg l. A distinct smell of rotten eggs that arises at levels above 1 – 2 mg l is a telltale sign of sulfur contamination. Another indication besides water smells is the extensive corrosion of the plumbing system. Slime formation is a feature too. It also discolors copper and brass utensils.

The vaporization of water at its boiling point can remove most of the spoiled egg smell and hydrogen sulfide gas. It is ineffective against sulfur bacteria and does very little against nondissolving sulfur. Boiling helps to soften that may make drinking water a bit more palatable despite having high sulfur contamination.

Yes. With its 5-stage operation, the Zero Water system can remove more than 55 % of the hydrogen sulfide and other contaminants. It has been tested and verified to eliminate the rotten egg smell from both hot and cold water. It is voted as one of the most reliable sulfur removal methods on a domestic scale.

Did this guide help you identify the reason for the rotten egg smell in the tap water? If the answer is yes, then share this article with your friends!

Action needs to be taken before sulfur reaches harmful concentrations and poses health risks. Sulfur odor in the hot shower means the magnesium rod in the water heater tank is working to chemically reduce sulfates. Rotten egg smell in drinking water elicits the need for water tests for hydrogen sulfides.

Depending on the exact source of the contaminants, choose from the aforementioned filters and stay healthy.