Many of us are used to drinking water directly from the tap. Going into the digital era, pollution is getting serious. Factories are built and the disposal of chemicals and waste often pollute streams and groundwater which is used as our source water.

Although our tap water is treated by municipal water treatment plant, it is still contaminated along the way when the water is transport into our home. 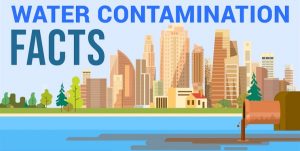 While your tap water looks crystal clear, some of the contaminants are odorless and colorless. Here are 5 water contamination facts that you should know.

These staggering facts let us reconsider the safety of our tap water. Although more than 70% of the people in the world are aware of water contaminations, there are still thousands of people die due to diarrhea of unsafe drinking water.

Developed countries like America are still affected by water contamination where 25% of the tap water is unsafe to drink.

What is exactly inside your crystal clear tap water? Some of the chemicals blend in quite well with water and it is hard to detect by naked eye.

After a thorough research, we have identified 13 water contaminants which are common yet harmful to humans. Overexposed to these contaminants will lead to serious consequences.

Arsenic is a natural metalloid component which often been picked up by groundwater from soil and rocks. It can cause cancer, skin problems and harms cardiovascular and nervous systems especially on young kids.

It is a combination of chlorine with ammonia which is used in water treatment plants to kill bacteria. Overexpose to chloramine will cause hemolytic anemia that reduces the red blood cell.

Water treatment plants often use fluoridation as part of their treatment process to remove virus and germs. Children are more susceptible to fluoride and cause a serious bone disorder.

It is a heavy metal component which often comes from old steel pipes. Lead poisoning will cause permanent damage to the nervous system, brain, kidney and bone marrow. Children and pregnant women will have the most risk if overexposed.

It is a natural material that combines with other components such as carbon to form an organic compound. Mercury can accumulate in our body and affects kidney functionality and ultimately causes cancer. Permanent brain damage will occur on developing a fetus.

Similar to Chloramine, Chlorine is used to prevent and kill the growth of bacteria. It is often used in treatment plants and swimming pool. Chlorine will cause skin irritation, dry out skin and asthmatic attack.

Especially in well water source, the microorganism such as E Coli, Giardia, and Cryptosporidium are the prime suspect for causes gastrointestinal illness, also known as diarrhea.

It is a silvery alkaline earth metal that causes water contamination due to drilling or industrial waste. The risk of overexposed includes difficult in breathing, increase blood pressure, brain swelling and damage to kidney and liver.

Human sewage and livestock manure are the main cause of water contamination for nitrate. This pollutants only affects infants under 6 months which leads to Methemoglobinemia, also known as blue baby syndrome.

It is a radiative decay from uranium which is found in soil and rocks when water flows through it. Due to the radiative characteristic, it will increase the risk of cancer.

Sediments such as rust and particles potentially will shorten the lifespan of appliances such as water heaters. On the other hand, it will affect the taste of the water which leads to children dislike drinking water.

How does the filtration process works? There are a filtration media which traps contaminants or perform ion exchange to break the bonding of contaminants.

These two methods will effectively contain the contaminants in the filter canister while only allow clean water to pass through.

Unlike distillation and purification, filtration water will retain all the beneficial minerals such as calcium and magnesium in the filtered water.

Water purification should not be mistaken for water filtration. Normally there will be an additional step to perform purification.

The most common purification method is reverse osmosis. Using a semipermeable membrane, it is able to remove up to 99% of the contaminants and produce pure water.

The purification method is preferred as it restored the water to its original conditions without involving electricity and extensive energy.

We learn the distillation process from the science class in school. It is one of the most effective ways to remove contaminants.

Distillation is divided into 2 parts that involve heating and cooling.

Tap water is heated up to boiling point which turns liquid into gas. In this process, the vapor will leave the contaminants behind to the next stage. The cooling process will convert gas to liquid in the cooling chamber leaving only pure water.

This method is the best way for removing foreign chemicals. However, it required huge energy to for the entire process of heating and cooling.

You probably will not have a direct negative health impact while consuming water with mild contamination. However, some chemicals do accumulate in your body.

Your health will deteriorate along the way if no action is taken against the matter. Understand your water condition and start protecting your family with dirty water today.