When was the last time you seriously thought about your shower head or the different types of shower heads available?

You, like most people, probably shower every day. If you do something every day, you should enjoy it. Here are ten different types of shower heads to help you find which one might be right for you. 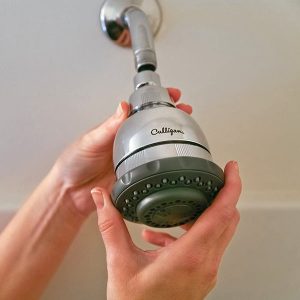 The great thing about a handheld shower head is its flexibility and ease of use compared to fixed shower heads.

For those with pets or small children, the ability to detach the shower head and directly spray the water where you need it to go is priceless.

People who value convenience above all else tend to love using this type of shower head. These shower heads more or less always also come with a wall-mount and either a rubber or a flexible metal hose. Because these tend to be very durable, you can upgrade your shower head without replacing the entire ensemble.

Even though it sounds like the stuff of science fiction, LED shower heads are more useful than you’d think. This type of shower head will light up your shower experience, bringing new moods and dimensions to your routine.

In addition to adding to the experience of taking a shower (and providing a perennial topic of conversation for any house guests), if ever you’ve a power outage where your lights go out and need a shower, this will have you covered.

Showering in the dark is a recipe for disaster, but you don’t need to worry about a thing with the LED shower head. The fact that you’ll feel like Captain Kirk while doing so is a bonus.

Someone, at some point, was bathing in a waterfall and decided they wanted that experience at home.

Of all the different types of shower heads available, the ceiling mount shower head most resembles the feeling of a rain shower. As the name suggests, this is a fixed shower head extending down from your ceiling like a light fixture. It’s less intrusive than a conventional wall-mounted fixture and eliminates your risk of bumping into pipes or hoses.

If you’re a tall person sick of stooping under your shower head whenever you need to wash your hair, this is perfect for you. With a rain shower head, you’ll be able to rinse your shampoo and conditioner out with the greatest of ease. It feels like standing in the cleanest rainfall you can imagine.

A similar experience to the ceiling fixed shower head, but extending from the wall rather than the ceiling. While this is a little more intrusive than the ceiling-mounted rain shower head, they tend to look more elegant than most wall mount shower fixtures, with a long, curving neck reminiscent of a swan.

These are also cheaper to install if your water pipes are already in the wall rather than the roof. If you enjoy the saturating experience of the rain shower, but your plumbing doesn’t extend through your roof, this might be the perfect type of shower head for you.

Some areas, like many major cities, have hard water in their pipes. This means their tap water has additional chemicals added, whether to keep the water clean or as a by-product of the environment.

Just as some people filter their drinking water, so too do many use a filtered shower head. Hard water can wreak havoc with your carefully selected bathroom tiles and even cause issues by irritating your hair and skin.

Enter the shower water filter, which features replaceable filter cartridges as a cost-effective solution to the hard water problem. By filtering out the various chemicals reducing your water quality, this type of shower head will provide you with a healthier shower and reduce the buildup and wear and tear on your beautiful bathroom fixtures. The difference once you’ve installed a filtered shower head is palpable.

Not just a head, but an entire experience. If you thought the LED shower was sci-fi futuristic, the shower panel could feel like you’re at the bridge of a  spaceship. Shower panels are significantly more complicated than most shower systems, occupying quite a bit of wall space.

Forget one or two taps to decide if you want hot or cold water from your shower head. The level of fine-tuning provided by this shower head will leave you feeling like a conductor before an orchestra. These include several nozzles in various positions, choice of spray patterns, an overhead spray, and temperature controls so you can unleash your bathroom Beethoven every morning.

They do say two heads are better than one. This combination of handheld and rain shower head offers the best of both worlds.

These aren’t for everyone, as the presence of dual shower heads can be somewhat confusing to house guests (as can the precise mechanism for switching between the two).

However, for anyone sharing a shower with someone else and unable to reach a compromise between the convenience of handheld and the deluge experience of a rainfall shower head, this might just be the saving grace your shared home needs.

A powerful, steady stream of piping hot water pours out of the shower head, every time. As the name implies, high-pressure shower heads use more water pressure than the others on this list.

This elicits a tangibly stronger flow of water from the heads, and as a result, these are favored by athletes, people with thick, curly hair, and people who work outdoors or with animals.

The increased pressure will make rinsing out shampoo and conditioner a breeze, while the gentle massaging action from the head will leave you feeling relaxed and invigorated every single time.

Wall-mounted. No-nonsense. No bells or whistles. A single spray pattern may be all you need. This is perhaps the simplest, most straightforward shower head on the market today. The single spray shower head is often found in hostels or gyms.

They only have a single spray pattern and minimal adjustability, but for people who don’t want or need a complicated shower, and don’t want to spend too long thinking about their daily shower, these are perfect.

Thanks to this simplicity, these are often the most affordable shower heads on the market.

These low-pressure shower heads are designed to use far, far less water than conventional designs. They accomplish this by lowering the water pressure, in some cases close to half of the average amount.

Many shower heads use between 2 and 2.5 GPM (gallons per minute) of water, while low-pressure heads can reduce that to 1.5GPM. This allows you to save huge volumes of water, which is better for the environment and slashes your water bill at the same time.

Did you enjoy this guide to shower heads? I hope you were able to find the perfect showerhead. Most of us shower for at least five minutes every day. Over the course of a year, that’s over thirty hours in the shower. If you spend a day of your life doing something, don’t you want it to be as enjoyable as possible?