What Is Distilled Water?

While browsing through the options of filtration for drinking water, distilled water will appear on the list.

But what exactly is distilled water and is it any different from other purification methods on the market? We will discuss everything pertaining to distilled water in this article. 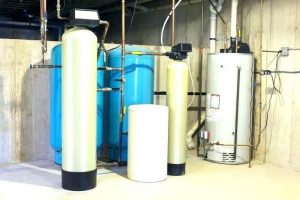 What Is Distilled Water?

The name distilled water comes from the process of distillation. The process involved boiling and cooling the steam to form pure drinkable water.

The process is capable of separate most of the substances that are dissolved in the water which made distilled water to be regarded as one of the purest water.

A little history lesson, distillation has been dated all the way back to around 200AD. Human has been using this process to produce clean drinking water.

However, there are controversial comments on the suitability of drinking distilled water due to the lack of minerals and nutrients. We will discuss this further in the later section.

How Does Distillation Works?

There two main processes that complete the entire distillation process. How does it work?

The distillation process starts with boiling. The boiling point for water is 212 degrees Fahrenheit or 100 degrees Celsius while most dissolved substances have a higher boiling point.

Boiling up to 212 degrees, the foreign substance are left behind as water evaporates. The water vapor is lead to another part to complete the distillation process.

With the help of the additional cooling element, the water vapor that reaches the lid is quickly turned into little droplets known as the process of condensation. A container will be used to store distilled water.

While different distillers will be using a different material, the distillation process is similar.

Is Distilled Water Safe To Drink?

To get straight to the point, yes, you can drink distilled water. It is completely safe especially to those that have a sensitive stomach.

You might taste the difference compared to tap water. Eventually, you will get used to the lightweight and mineral-free taste of distilled water.

Drinking distilled water exclusively can present some problems though.

Here are some of the most notable benefits you can enjoy from drinking distilled water.

The distillation process gets rid of just about everything. The vast majority of harmful chemicals and waterborne pathogens present in tap water are removed through distillation.

If you have proved vulnerable to waterborne diseases before, drinking distilled water can be a good move.

Because distilled water does not contain contaminants and minerals, you can use it to detoxify your body.

Doctors frequently advise their patients to drink more water so that organs such as their liver and their kidneys can remain relatively clean. Drinking distilled water can help with that.

If you are prone to suffering digesting issues, drinking distilled water is a safer bet than going with the readily available supply of tap water.

The contents of tap water may not play well with your stomach. You don’t have to worry about them if you are drinking distilled water.

Distilled water can be best described using the words clean and pure, but that doesn’t mean drinking it for a prolonged period of time comes with zero risks.

Here are the most notable side effects that could emerge as a result of you relying solely on distilled water.

Research shows that people who drink one liter (about 0.26 gallons) of tap water per day can receive more than one percent of their daily recommended intake of the minerals calcium, copper, magnesium, and sodium.

Those minerals have positive effects on your body. If you no longer get them from your water, you must obtain them from other sources or risk suffering from some mineral deficiencies.

Acidosis – Change of pH in Blood

Based on recent studies, a combination of poor diet and the slightly acidic nature of distilled water could lead to acidosis, alteration of pH in our blood.

Health problems that can stem from having acidosis include fatigue, headaches, and impaired heart rate.

To be clear, you would have to drink an extreme amount of distilled water and almost purposefully avoid eating foods containing minerals such as calcium and magnesium to develop acidosis, but it can still happen on rare occasions.

Other Parts of Your Body May Be Weakened

The lack of minerals in distilled water can also lead to some parts of your body growing weaker.

There are discussions saying that distilled water you drink may extract minerals from other parts of your body such as your teeth. Over time, that can turn into a real problem.

The Common Uses Of Distilled Water

Apart from drinking and bathing, there are other times when people use distilled water.

One of the best alternatives uses for distilled water is for topping off your car battery. Distilled water is great for lead-acid batteries because it will not corrode any of that car part’s components.

Unsurprisingly, water completely free from impurities is sought after by doctors and scientists. Distilled water is often used to clean tools used in the hospital and it is also utilized for laboratory tests.

Distilled water must also be used in kidney dialysis machines. This will ensure they are free from microorganisms to avoid infection.

Note: Although distilled water is free from contaminants, it doesn’t means that it is good for home appliance. It is best to have 50/50 with tap water.

Purified water is one of the closest fights against distilled water. However, they are some key differences.

What Is Purified Water?

Purified water normally refers to water that is produced by a hyper-filtration technology called reverse osmosis.

This technology is capable to remove anything that is smaller than 0.0001 micrometer, 100,000 thining than human hair.

Let’s highlight some of the differences between distilled and purified water.

While purified water did a good job in removing 99% contaminants, distilled water leads the race of removing all the minerals with its unique filtration technology. Boiling the water kills microorganisms and free from water-borne diseases.

As mentioned, boiling and condensation are the core process of producing distilled water. Purified water is generated through a multi-stage filtration system and ended up with a reverse osmosis membrane to remove 99% of the contaminants.

It takes time to generate distilled water because of the long process of heating and cooling. Most of the commercial distiller produce 5-7 gallons of water per day whereas purified water has 10X production rate, 50-90 gallons per day.

The process of distillation requires energy for boiling and condensation whereas purified water system only requires good water pressure to push through the multi-stage filtration system.

Water distillers are portable electronic appliances and required no installation while the purified water system requires installation under the kitchen sink or over the counter.

While there are controversial statements on distilled water, it is proven to be one of the best ways to free your drinking water from contaminants.

Although it is a lengthy process to produce a gallon of distilled water, it is safe for daily consumption on a normal diet.