What Is In Your Tap Water?

This post will provide you a deep dive into what tap water really is. With this knowledge, you should be able to better understand the quality of tap water you have.

You should also be able to determine if tap water is something you and your family should consume on a regular basis. 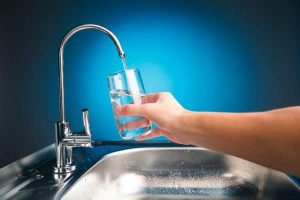 What Is Tap Water?

Tap water is known by many names. You may sometimes hear it be referred to as municipal water, running water, or even sink water.

Regardless of how you prefer to call it, tap water is the substance that flows into homes and buildings across the country via underground pipes.

Tap water is processed and treated before it is sent to residential and commercial establishments. In the United States, it is also regulated by the Environmental Protection Agency (EPA).

Tap water started to become widely available during the 20th century, although it remains inaccessible to many in developing nations.

The Sources Of Tap Water

Tap water can come from a variety of sources. It may come from nearby bodies of water such as lakes and rivers, or from man-made sources including reservoirs and wells.

The location of the city or town receiving the tap water has a huge impact on where the water comes from.

Notably, tap water is not directly provided to homes and other establishments from their sources. Instead, they first undergo treatment at plants to ensure they meet established EPA standards.

How Are Tap Water Treated?

Cities and municipalities employ a multi-step treatment to ensure that they provide clean tap water to their residents.

It is explained from the Centers for Disease Control and Prevention (CDC).

The next part of the treatment process involves allowing the floc to reach the bottom of the water supply.

With the potentially problematic particles now larger in size and relegated to the bottom of the water supply, the water can now be filtered.

The last stage of the treatment process involves adding disinfectants to the water.

The disinfectant is introduced in order to kill any remaining contaminants and also shield the water from them as it makes the journey from the treatment plant to other establishments.

As of 2012, 75 percent of the United States population had access to sufficiently fluorinated water.

There are different kinds of contaminants that can make their way into the municipal water supply. Listed below are six of the most common contaminants.

Arsenic can be found in the Earth’s crust and it can make its way into the water supply through a variety of channels.

Prolonged exposure to arsenic-laced drinking water can lead to a variety of problems, including changes in the skin. Lesions and patches may start to appear and pigmentation may occur as well.

If the presence of arsenic in the drinking water is not addressed, it can cause long-term health problems such as skin, lung, and bladder cancer.

Chlorine is often added to water as a disinfectant, but it can have other effects too.

A background document from the World Health Organization offers some insight into the potential adverse effects that heavily chlorinated water can have on the human body.

Per the document, “it has been reported that asthma can be triggered by exposure to chlorinated water.”

Other health issues that have been associated with exposure to chlorine include dermatitis and bladder cancer.

Since copper is a material often used to create tubing, it can end up falling into the water if the water passing through is acidic enough.

Individuals who consume a lower dose of copper may suffer from headaches and vomiting. Gastrointestinal bleeding and acute renal failure are other concerns related to copper consumption.

Added as something that can help teeth, fluoride can be problematic in high doses.

Consuming too much fluoride via your drinking water can lead to dental fluorosis – a condition that leads to discoloration and even damage being dealt to teeth. Skeletal fluorosis is yet another potential side effect of excessive fluoride consumption and developing that condition can lead to your bones being damaged significantly.

Older pipes made from lead must be replaced right away. They could end up bringing lead-laced water into your home.

Lead is particularly harmful to younger individuals. It can reach the brain and cause convulsions and even death. Younger individuals who survive lead poisoning may suffer from behavioral disorders and experience mental retardation.

Water sources located next to industrial plants can end up contaminated with traces of mercury. Coal processing plants in particular can produce significant amounts of mercury.

Chronic exposure to mercury can have severe adverse effects on different parts of the body, including the nervous and immune systems. Inhaling mercury vapor can cause numerous ailments as well as death.

To ensure that tap water is safe to use, different tests can be run on it.

To be more specific, bacteria testing is conducted on tap water to identify coliform bacteria. The coliform bacteria are not the problematic ones per se, but they can indicate that there are other organisms nearby that are carrying diseases.

Coliform bacteria are relatively easy to test for given how they tend to cluster.

Chlorine tests are necessary as they can help determine if the right amount of the substance is present in the water supply.

Different types of testing materials can be used to pinpoint the amount of chlorine currently present in the water. Among them are color-wheel test kits, digital colorimeters, and pool test kits.

Heavy metal testing is a must for any kind of water supply. Failure to have your water tested for heavy metals can lead to harmful contaminants such as arsenic, copper, lead, and mercury coming through, just to name a few.

Varied methods for heavy metal testing are employed depending on the water source.

Though not necessarily harmful to people, total dissolved solids must still be identified as they can lead to the rapid deterioration of fixtures, dishes, and clothes.

Activated carbon filters are often used for the purposes of getting rid of organic compounds in the water. They excel at filtration because activated carbon features numerous pores that are capable of capturing contaminants.

Carbon filters are often activated either through the use of steam or other chemicals.

In distillation, high temperatures are leveraged for the purpose of cleaning the water.

The process involves the water being boiled so that the contaminants can effectively be separated from the water. The boiled water is turned into a gas and is then condensed back into a liquid.

Clean water is made available after the distillation process has been completed.

The process of reverse osmosis produces clean water with the help of pressure and a specially designed membrane.

Pressure will first be placed on the solution to be filtered, which in this case is the tap water. The pressure will force the tap water to pass through the membrane. The membrane will let the clean water pass, but block the passage of larger substances.

Tap water is helpful to have on hand for various household uses such as washing clothes and watering plants, but before you drink it, be sure that it is safe.

Hopefully, this post has shown you what to expect from tap water and what you can do to improve its quality.