How to Remove Manganese from Water

You probably aren’t aware of metals like manganese in your water supply. These two similar metals cause damage to your health when their intake is higher than average. That’s why removing iron and manganese is necessary to improve water quality. 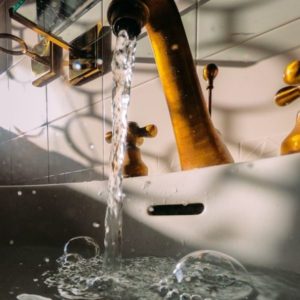 You can use the following methods to eliminate these substances from your drinking water.

Manganese greensand filter is specially designed to remove manganese from drinking water. But it is highly efficient in iron removal as well. Its filtering ability is not just limited to manganese, but it is also effective for hydrogen sulfide.

Manganese sand is a filter medium for water waste removal. While making manganese greensand, a compound glauconitic greensand makes the premium filter material. On this medium, we coat a shiny layer of potassium permanganate. This layer is pretty hard and thick to remove manganese deposits in drinking water.

This filter medium performs oxidation filtration by oxidizing manganese to manganese oxide. Later it uses the ion-exchange method to remove both oxidized iron and manganese along with hydrogen sulfide.

The use of chlorine bleach is also very effective for removing manganese from the water supply. Liquid chlorine is a perfect and robust agent for oxidation. Its oxidation capacity is just like potassium permanganate. After oxidation, it produces the oxidized form of iron and manganese; its other name is oxidation filtration.

Birm media is another filtration media that explicitly removes manganese. It is made of granular material. It is an activated carbon filter for removing manganese and iron from water.

Birm press has an active filter that is granular and insoluble. For manganese removal, it causes the oxidation of these metals to form a precipitate that is collected on its bed. The media gets regenerated by backwash.

Dissolved oxygen has high efficiency for removing iron or manganese minerals. It reduces iron concentrations in water significantly. We can pass water through aeration chambers. The dissolved oxygen in the air decreases manganese accumulations by oxidation.

Another method to use dissolved oxygen is bypassing the electricity through the air. It produces ozone which removes dissolved manganese and decreases dissolved iron concentrations. This decrease occurs through the oxidation of these minerals and their precipitation. The manganese greensand filters can remove the residues after the oxidation.

Manganese is a mineral that is naturally found along with iron. It is a metal and a tough yet brittle one. Manganese belongs to transition elements according to its chemical classification. Our body needs manganese in very minute amounts for several functions.

It is silvery and grayish, which is also the color of iron. Most people confuse it with iron because of its similar appearance.

Iron can be found along with manganese or other minerals or as an alloy. Both have a bitter metallic taste. It is rare as a pure metal, and that’s why it occurs alongside manganese in nature.

Manganese is present more abundantly in the groundwater and less in the surface water. Due to the presence of manganese in groundwater, it enters the water supply.

Human activities like mining cause manganese to enter both surface water and groundwater. In addition to mining, it is present in industrial discharges from industries like varnish, fertilizer, fireworks, and cosmetics, etc.

The Symptoms and Danger Manganese Contamination

Usually, it is hard to detect dissolved metals, but manganese gives drinking water a bitter metallic taste. Rarely do both these metals become apparent as visible solid particles.

The Environmental protection agency warns they shouldn’t be higher than one mg/l. Even if these are present in treated water, they show hallucinations, aggressiveness, irritability, stomach pain, vomiting, and nausea.

But the dangers of drinking water with these two dissolved metals are much more severe. Too many manganese molecules cause difficulty walking, tremors, and spasms in facial muscles. The higher concentration of iron in water supplies causes the corrosion of intestinal linings.

They will spoil the taste of your mouth as they have a characteristic bitter metallic taste. The manganese bacteria will cause many other dangerous diseases. They cause manganese toxicity which is harmful to the brain and stomach.

Manganese is dangerous for the aesthetic of your houses. They cause rust formation and destroy the integrity of the structure. Your water heater becomes loaded with these, and heating rods coated with these take more energy.

Other water treatment systems remove iron and manganese solid particles through reverse osmosis, ion exchange, distillation, and water softeners. A filter tank is also used for removing manganese. It is mainly used as an additional chemical treatment to remove manganese.

Another option is to get a water softener with an RO system. This water softener is good at removing manganese yet retains the beneficial qualities of drinking water even after water treatment.

The whole house water filter is mainly based on the reverse osmosis system to provide good-quality drinking water. This water treatment system cleans the drinking water before reaching outlets and faucets. It usually has three types of filters.

The first filter is sediment for removing rust, dust, and any other solid particle. It is suitable as manganese cause these losses as well. The second filter is made of carbon which is active to remove chemicals. At the same time, the third is the RO filter, which eliminates microorganisms and heavy metals, including manganese.

You should buy a well water iron filter as soon as water gives a yellow color or has a metallic taste. This filter works in three steps for water treatment of manganese contaminated water.

The first step uses dissolved oxygen or any other oxidizing agent to produce oxidized iron. Then the filter transfers the water to the filter bed for filtering manganese. The last step is more of a cleaning action that flushes out the contaminants. It can remove iron from 1-7 ppm.

Countertop filters are pretty manageable for water treatment to remove manganese molecules. You can place them on the counter near the faucets. They use many methods for cleaning the raw water depending on the type of impurities. Removing manganese can use a reverse osmosis filter to produce good quality drinking water.

FAQs on How to Remove Manganese from Water

How do I know if my house is contaminated with manganese?

There will be many symptoms showing the presence of manganese. The water becomes discolored and tastes bitter. Your house will start showing rust in pipes and coat the surfaces of rods.

Does boiling the water remove manganese?

For manganese removal, you should have to bring water to a rolling boil. Gentle boiling will not remove manganese from water. After a time, it will precipitate as visible solid particles on the surface. Now, you can filter it.