How to Remove Ammonia from Water

Ammonia is a water contaminant that is responsible for a lot of health conditions, including organ damage and shock. Mainly, the surface water contains 12 mg per liter of this contaminant. In contrast, the percentage in the groundwater is lower. However, due to the increase in the use of ammonia-containing fertilizers, the concentration of ammonia in the drinking water is also increasing.

The water ammonia increases the pH of the water and makes it undrinkable. You need to be aware of how to remove ammonia from the water. 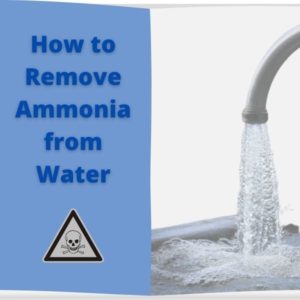 4 Effective Ways to Remove Ammonia From the Drinking Water

Reverse osmosis removes toxic ammonia and reduces the pH level of the water. The RO system has an activated carbon filter, sediment filter, and a membrane for reverse osmosis. The reverse osmosis unit in a whole house RO filter system has a postfilter cartridge to remove ammonia. Even carbon prefilters are used in these systems for eliminating ammonia.

The water ammonia occurs in two forms. When the pH is below seven, it is in the form of ammonia. But when it increases above seven, ammonia exists as an ammonium ion.

The postfilter cartridge has a cation resin in it. The simultaneous affinity of this cation for ammonia and ammonium ions is impressive.

Breakpoint chlorination is the use of free chlorine to decrease elevated ammonia levels. The high ammonia concentration makes it easier for ammonia to combine with other chemicals like chlorine.

The next step involves dechlorination. This step removes chloramine effectively along with the free chlorine. There are multiple ways of dechlorination i.e., boiling,  UV rays,  and Vitamin C. Thus,  it is an effective way of ammonia removal.

The ion exchange method involves the use of standard water softener resin. This resin is a cation resin that has an affinity for the ammonium ion more than the ions it has.

The most effective resin for ammonia removal is sodium zeolite resin. This resin is used as a primary softener in many household water softeners. When water with ammonia in ammonium ion state is passed through the system, the resin binds the ammonium ion with itself.

The ion exchange system has a counter-movement of water against the resin bed. After the resin has reached its limit, you need to recycle it.

It involves washing the most ammonia from the resin bed. After this step, a brine containing sodium zeolite enters the system and deposits them on the resin bed. Thus,  the ion exchange system becomes ready for the next cycle.

This system has a good removal capacity of ammonia and ammonia hydroxide. Most aquarium owners use the ion-exchange method along with other mild treatment strategies.

Biological filtration involves the natural bacterial growth for drinking water treatment. Another name of this process is nitrification. This system has a granular packing in a column that acts as a bed to remove ammonia nicely.

As water flows from above and air comes from below for intensive aeration, natural cultures of bacteria are introduced into this. Bacteria perform a natural oxidation-reduction reaction to decrease ammonia levels.

These bacteria break ammonia into nitrates which are the natural product produced by nitrifying bacteria. In this way, nitrates and nitrites are removed from the water to produce good-quality drinking water.

Ammonia comes from marshes and organic matter as ammonia gas. But it is present in the form of salts as well.

Ammonia has two forms naturally. One is a neutral compound of one nitrogen and three hydrogens. While the second form is an ionized form that is an ammonium ion.

The non-dissociated form is more toxic ammonia than the ionized form. In water, it is present as ammonium hydroxide. But both forms and names present the same concept of ammonia. If the level of ammonia exceeds 15 mg/l in drinking water, it causes ammonia poisoning.

When decomposers decompose the dead body of animals and plants, they produce ammonia. Ammonia is present in the form of salts too. The rainwater contains ammonium chloride, areas of the volcanic eruption have ammonium sulfate, and these salts are also present as crystals as well.

The degradation or chemical reactions of these salts release ammonia. Inorganic sources of ammonia are power plants, fertilizers, manufacturing emissions, and automobiles.

The excessive use of ammonium fertilizers have increased the percentage of ammonia in the drinking water.

The Symptoms and Dangers of Ammonia

If you have been drinking water infiltrated with ammonia for a long period, you are at a serious health risk. Ammonia poisoning can damage many human organs including lungs and kidneys.

Drinking water with high ammonia levels causes burns to the throat and stomach. It affects our nervous system too. You may feel confusion and shock. At higher concentrations, you are in danger of fainting and collapsing.

The low concentration of ammonia in water causes stomach and throat irritation. Sometimes, it induces vomiting and nausea as well.

If you are having water with ammonia for a long time, you will experience symptoms like chest tightness, wheezing, pain in the eyes, ear, and nose, and fever.

Ammonia has a strong affinity with water. It dissolves very easily in the water because of ammonium hydroxide. That’s why filtering out ammonia is not that easy. An ordinary filtration system cannot eliminate ammonia.

Other filters that have a water softening system also remove ammonia. But they have the ion-exchange method as a primary method. So after cation resin does its work, other ions replace it. So a primary softener removes ammonia initially unless it reaches the hardness endpoint.

After a hardness breakthrough, a polishing softener removes ammonia.

We are recommending you the best water filters to remove ammonia.

A water pitcher is a very suitable filter for filtering drinking water. It is because of its size that fits even jugs and pitchers. You have to install them on pre-filled water vessels.

These filters are great for ammonia removal. They also eliminate chlorine smell and taste. The absence of smell and taste is an indication of ammonia-free water.

Water pitchers can filter almost 40-159 gallons of water with a single cartridge. Those who cannot afford big filters should get this one. It also increases the water pH levels because it has remineralization filters to increase the alkalinity. You can put activated carbon with the filters to enhance the efficiency of this filter.

Countertop filters mainly have a reverse osmosis system to filter water. It makes it highly preferable for removing ammonia and improving water quality.

You can connect countertop filters to any faucet in your kitchen or anywhere else. For this linkage, you need an adapter to connect the faucet head and the filter. After this, the filter will send treated water to the faucet.

It is a highly efficient system because of many carbon filters that remove any kind of contaminate including ammonia. They are portable and perform filtration in multi-steps. It is the most suitable filtration system for houses. Some countertop water filters can reuse the water too.

A whole house filtration is the best one you can get your hands on. It will effectively purify the water for your whole house. If there is any ammonia contamination, this system will clear the water of any taste or smell. It also works on the principle of RO and, has a semi-permeable membrane in it.

The whole house filter has the capacity of filtering huge volumes of water. It can remove both ammonia and chlorine as well as volatile contaminants. This is efficient in saving water too.

FAQs on How to Remove Ammonia from Water

How do I know if my house is contaminated with ammonia?

Ammonia is very easy to detect in water. Because it has a characteristic pungent odor which makes it difficult to drink water. Plus, it gives the water a weird and bitter taste. The taste changes due to chloramines. Thus, you can know about the presence of ammonia.

Water softeners are efficient ammonia removers. They have a cationic resin that removes ammonia in its ionized form. Either polishing softeners or primary softeners, both work well in decreasing ammonia levels.

Yes! Boiling is the simplest method to remove ammonia from the water. But there is one condition that the water should be a little bit alkaline. And it removes free ammonia more efficiently than ionized ammonia. This is because heat easily breaks the bond. But the bonding between water and ammonium ion is strong. So, boiling will not remove ammonium ions.

Now, you know that removing ammonia is not a big task. Water filters come handy for this tedious task. They are highly efficient and affordable. You shouldn’t worry about the quality of water if you have one of those. We would like to hear your opinion about the guidelines. So, leave a comment below.

Knowing how to remove ammonia from water is a life-saver as your health lies in the quality of water. Use these methods for ammonia free water.